Novel by the numbers:

Kari had a perfect life, a loving fiancée, good job, until one day his sudden death robbed her of that neatly planned future.Trying to restart her life she moved to New Field. She didn’t know how to move past the tragedy .  She never thought that a handsome, half naked man swimming in the cold pond would be the one to help her find her way. Holden had come to New Field to run away from his life.  Not knowing what he wanted he was surprised to discover it might be her. Poignant and heartfelt, Picking Up The Pieces celebrates the trials and joys of life as well as the promises of second chances.


Posted by Annay Dawson at 1:12 PM No comments: 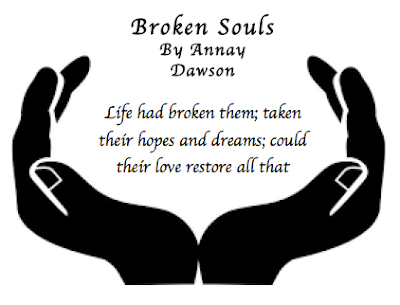 Posted by Annay Dawson at 6:38 PM No comments:

Novel by the numbers:

Watch for my new novel this summer. On June 1st I will post the first of many chapters on my blog. Feel free to comment, predict, and even add to the chapters in the comments section as they go up. By the end of summer the entire book will be up on my blog.
So excited to see what happens!

First chapter will be up by June 1st. Mark your calendars!
Posted by Annay Dawson at 1:35 PM No comments:

Novel by the Numbers - The Soap Opera of Stories

I know that there are no new ideas but for me, this is one I haven't tried. I am excited to put my book out there for you to read and put in comments on. I have always looked to do and try different things.

This time I have decided to take one of my novels and serialize it, much like a soap opera is. However unlike a soap opera this one will come to an end around Labor Day. There will be two chapters a week published in my blog. I am hoping to get feedback as well as entertain my readers.

If you are interested in serializing a story on my page please contact me.
Posted by Annay Dawson at 3:32 PM No comments:

Only one more installment of this story:


“I’m not making it through the program,” Jack was looking toward the night sky. Ward could tell that his thoughts were far away. In fact he could tell that his thoughts were about his mother, his father, and his ancestors.  Whatever the trainers were doing to get them to read minds seemed to be working even if he wasn’t quite ready to trust it. Over the last few days the entire group had been training and studying at least sixteen hours a day. One day it would be self-defense instruction, rigorous and demanding. On alternative days they had been watching tapes of psychics documenting the clues they had picked up on their mark, cram courses on reading body language, and then some very controversial and unusual EEG trials and trainings. The last had been the hardest to understand but also the most wearing on them. Funny how that could make him so dead tired, both body and mind, where the physical challenges of the self-defense courses only tried his body. Today had been a self-defense day and their bodies had been pushed to the limits, his muscles aching and complaining about not getting the rest it so wanted right now.
“What makes you think that?” Ward asked even though he already knew. Jack had been able to take him down a number of times today during the drills. In fact, he had taken down many of the people here, after all he did have an advantage; he was already an agent and trained. The trainers were using that advantage.
“You are reading what I am thinking right,” it was a statement. When Ward didn’t answer he continued, “A moment ago I was thinking of my family, especially my mother and father, but you know that. I’m pretty sure,” Jack said this more to help Ward understand how his skills were so much farther developed than his. Jack sat down, crossed-legged on the ground, focused on nothing but letting nothing get past him. The bugs had gotten quiet off to his left.
“You just need to give it time. You’re top of the class in defense,” Ward stretched out on the ground as he was not as accustomed to the physical demands as Jack was. His muscles collectively melted into the ground. Ward had been in shape coming in but this was way past that; getting up was going to be difficult. It has shocked him to know that he had been spot on with his reading. He could even describe the features of both of Jack’s parents, but he wasn’t going to share that. He was beginning to trust what he was seeing from other people’s minds. Suddenly, at the edge of his conscious he could tell they weren’t alone, and that whoever was there was very interested in their conversation. A face floated through his mind, it was Pat’s.
“It’s okay, it was a stretch that I made it this far, and they won’t take me out yet,” Jack was sitting on the bench, “I get the feeling I will be kept on for a while because of the self-defense skills I bring to the training. Important skills once they put you out in the field, but I just can’t get past getting only general feelings from people and not solid thoughts. But that’s not why I wanted to talk with you,” Ward wasn’t sure what he was going to say next, so he waited. He decided to try and focus on reading Jack’s thoughts. At first it was just fuzzy, static like the way old television signals used to be. Slowly though as if using a fine tuner the images and thoughts cleared.  What he read was surprised him. Jack didn’t trust Bobby even though he had never given him, or anyone else, reason. Ward was picking something up on the edge of that television screen that seemed to form in his head. He refocused on the thoughts of another person nearby, he could feel their thoughts and presence in his head. This picture was much harder to tune in but he could feel the overall emotions. More interesting was the fact that this person, Pat, had reservations about Bobby as well.
“Why don’t you trust Bobby?” Ward ventured, working off his read.
“Not sure,” and this time Jack looked back to the stars, “just a feeling, a guess. I can tell by watching the trainers just how interested they are in the both of you, but that’s not a surprise to you either.”
“I feel like they are pushing some of us harder and farther,” in fact what Ward had felt was extreme interest. Up until now he wasn’t sure exactly why but complete picture as to why the interest was beginning to form. He has started to guard his thoughts more, if it was really possible to read minds they he had to be sure to keep his thoughts as secure as possible. He was beginning to see that a few of them might be progressing faster than normal.
“There is something both of you are doing that has caught their attention, I’m not sure what but there is something about the both of you that has put you both in the bullseye.  I know you two have teamed up a bit but I need you to watch yourself. I may be off, my skills are not as good as yours or theirs, but there is something.” Jack got up, “It may be nothing by the time we finish training but...” and he left it there. Jack looked around as if he knew there were someone else there.


“I’ll be careful,” not just referring to Bobby as Ward felt the shadow of thought move out of his range raising more questions than answering them.
Posted by Annay Dawson at 1:07 PM No comments:

Coming close to the end of this short story. What do you think should happen next?

Days later the number of people left in the program had dwindled.  Ward’s roommate was still in the program, but things were getting harder. They were demanding more from each person. Ward and Bobby drug themselves into the room long after the sun had gone down. Whatever they had been having them do must have been working. Both Bobby and Ward stopped short and turned to for the person that was sitting in the dark in their room.
“Jack?” Ward spoke as Bobby walked over and turned on the light. Jack and worked with them a number of times. He was already a trained agent and had been invaluable with the basics. Over a short period of time he had become a trusted associate and a good friend. Ward could feel that something wasn’t right and it wasn’t just the look on his face or the droop of his shoulders. It also didn’t go unnoticed that Bobby turned and flopped down on his bunk in exhaustion. Jack glanced over at Bobby and then back at Ward.
“Can we,” and he nodded toward the door. Ward was exhausted himself but something was troubling Jack and he couldn’t get it out of his mind. If he was right in how he was reading his mind, a skill that was still so new to him he didn’t want to trust it completely yet, it had something to do with Jack’s progress in this training, and Bobby.


“Yeah, I could use some air myself,” and he turned, summoning up energy he didn’t have, and walked out the door.
Posted by Annay Dawson at 2:45 PM No comments: